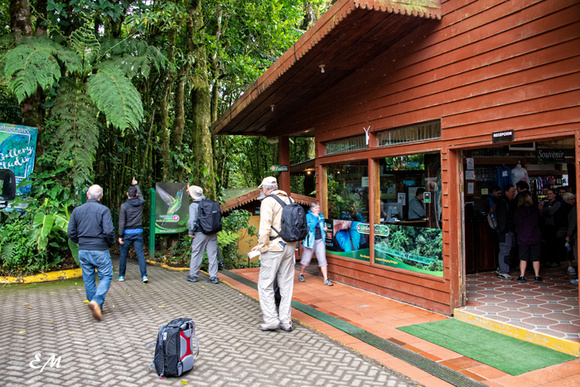 The Monteverde Cloud Forest Reserve (Reserva Biológica Bosque Nuboso Monteverde) is a Costa Rican reserve located along the Cordillera de Tilarán within the Puntarenas and Alajuela provinces. Named after the nearby town of Monteverde and founded in 1972.
The Reserve consists of over 10,500 hectares (26,000 acres) of cloud forest, the reserve is visited by roughly 70,000 visitors a year. The Reserve consists of 6 ecological zones, 90% of which are virgin forest.
An extremely high biodiversity, consisting of over 2,500 plant species (including the most orchid species in a single place), 100 species of mammals, 400 bird species, 120 reptilian and amphibian species, and thousands of insects, has drawn both scientists and tourists alike.

In recent years due to global warming the cloud forests climate has changed.The clouds are starting to form at higher elevations.
As cloud coverage at low elevation is reduced, intense sunlight causes temperatures to rise which can have a great impact on the hydrologic system of the forest. If temperatures rise enough, the forest would dry up. This is how climate change causes the cloud forest to recede up the mountain.
© ThePassingShow
Powered by ZENFOLIO User Agreement
Cancel
Continue