The Seaton Trail is located along the West Duffins Creek in Pickering, Ontario. It runs for 12.9 km from 3rd Concession near Brock Road northwest to Highway 7 at Green River. The trail follows historic hunting and fishing routes on the creek, used for centuries by aboriginal people. In pioneer times, the creek and valley became the site of several water powered mills. A former grist mill stills exists at Whitevale.

The trail got its name from the planned community of Seaton, which was envisioned in the 1970′s to accompany the new airport planned for the area. The airport has not been built and the community is just now coming to reality, but the Seaton Trail has been there all this time.

The trail was created by the Ontario government in cooperation with the Metropolitan Toronto and Region Conservation Authority (now the TRCA) in the 1970’s and was built by high school and university students. The trail was maintained for a good many years by the Boy Scouts located at Camp Pidaca (near 3rd Concession). 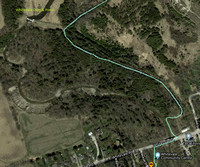 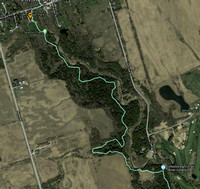